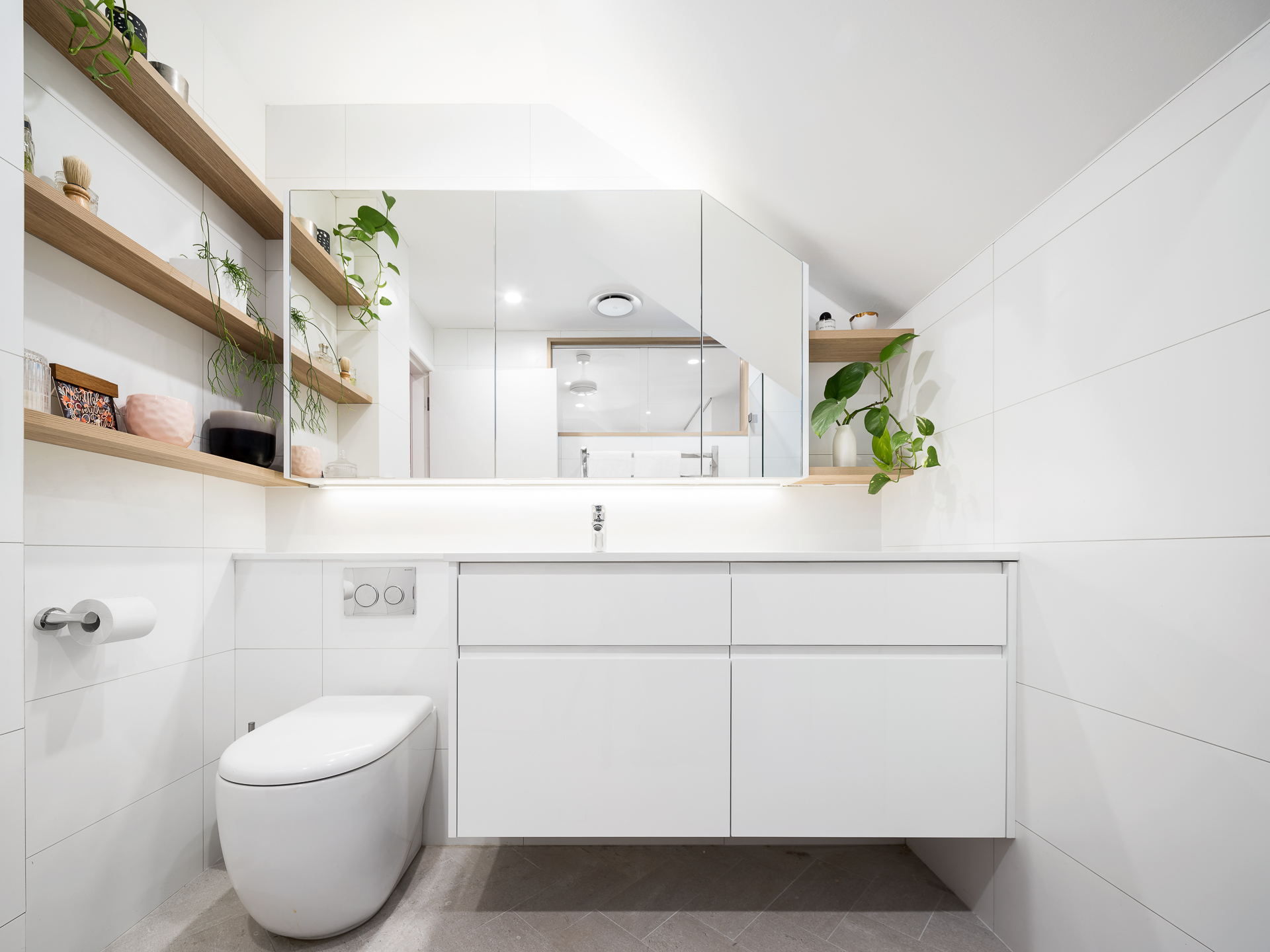 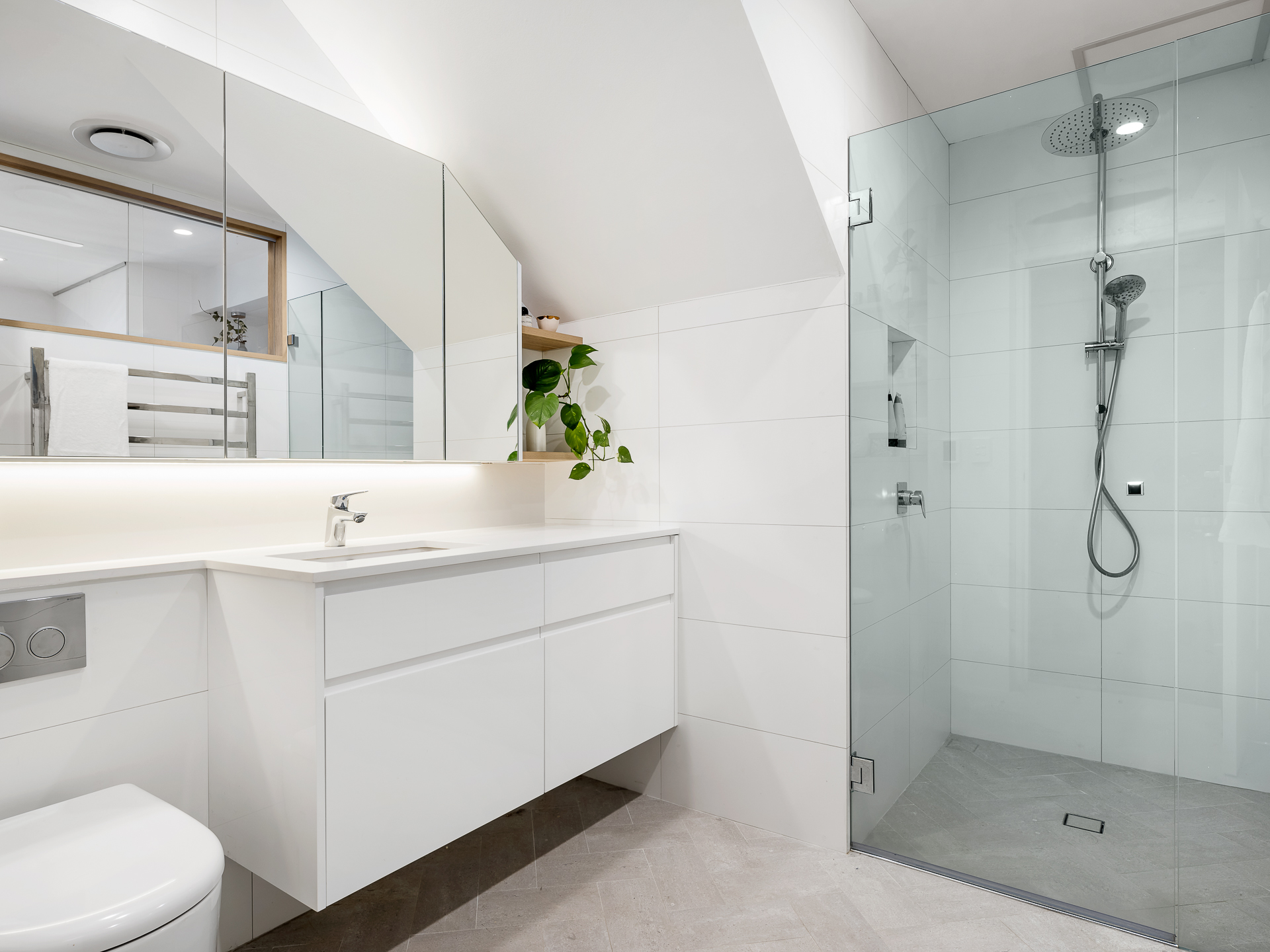 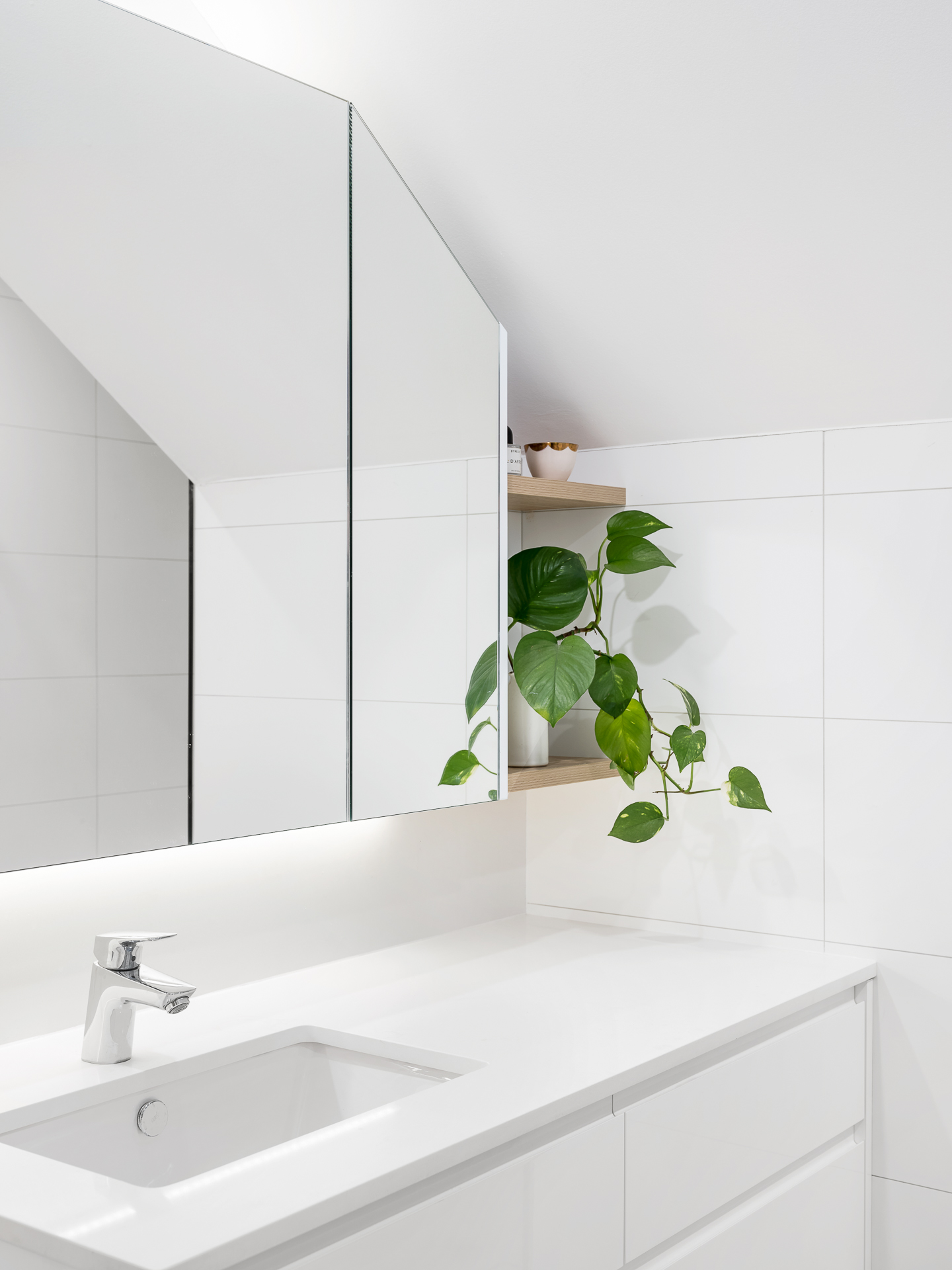 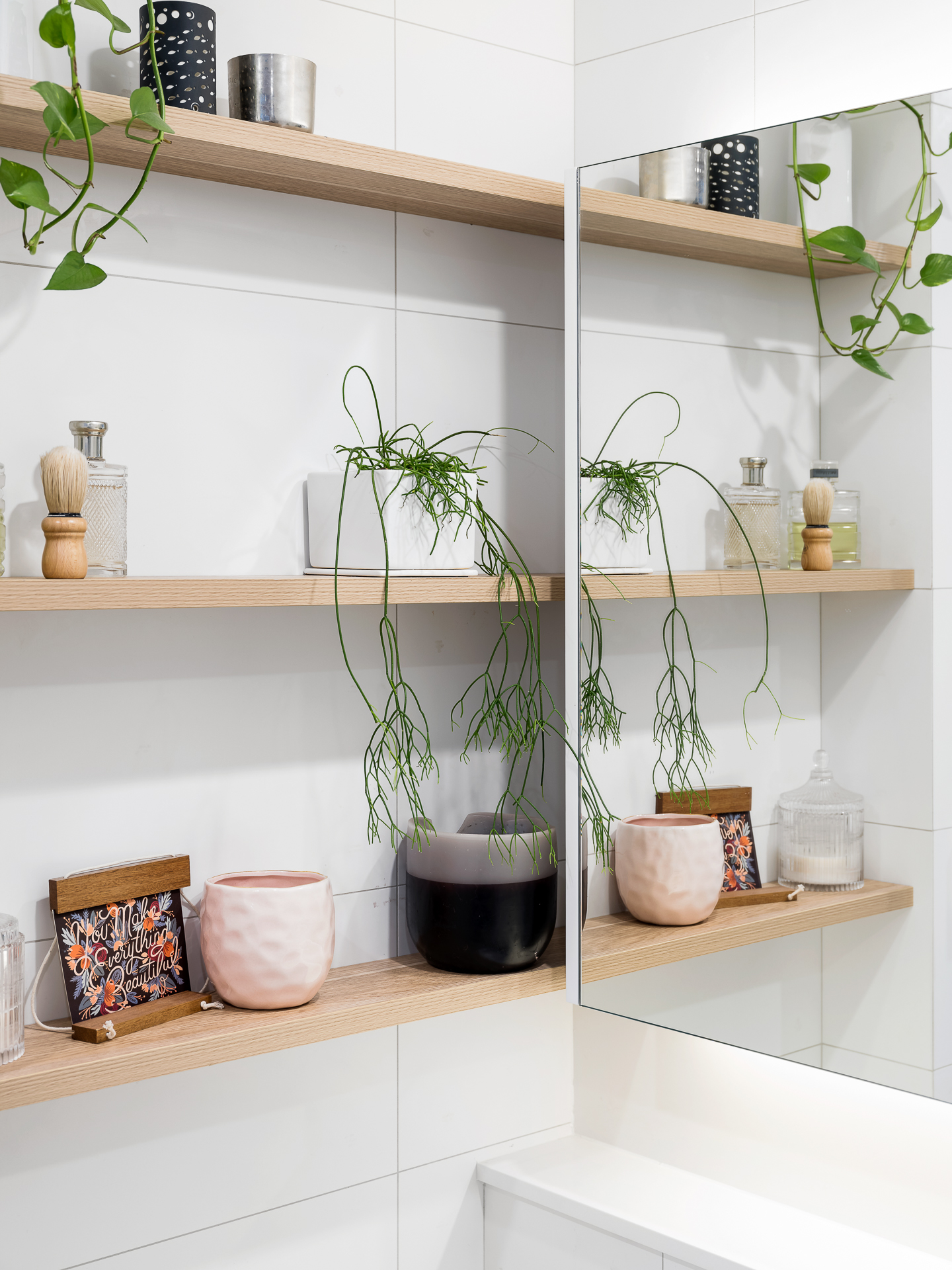 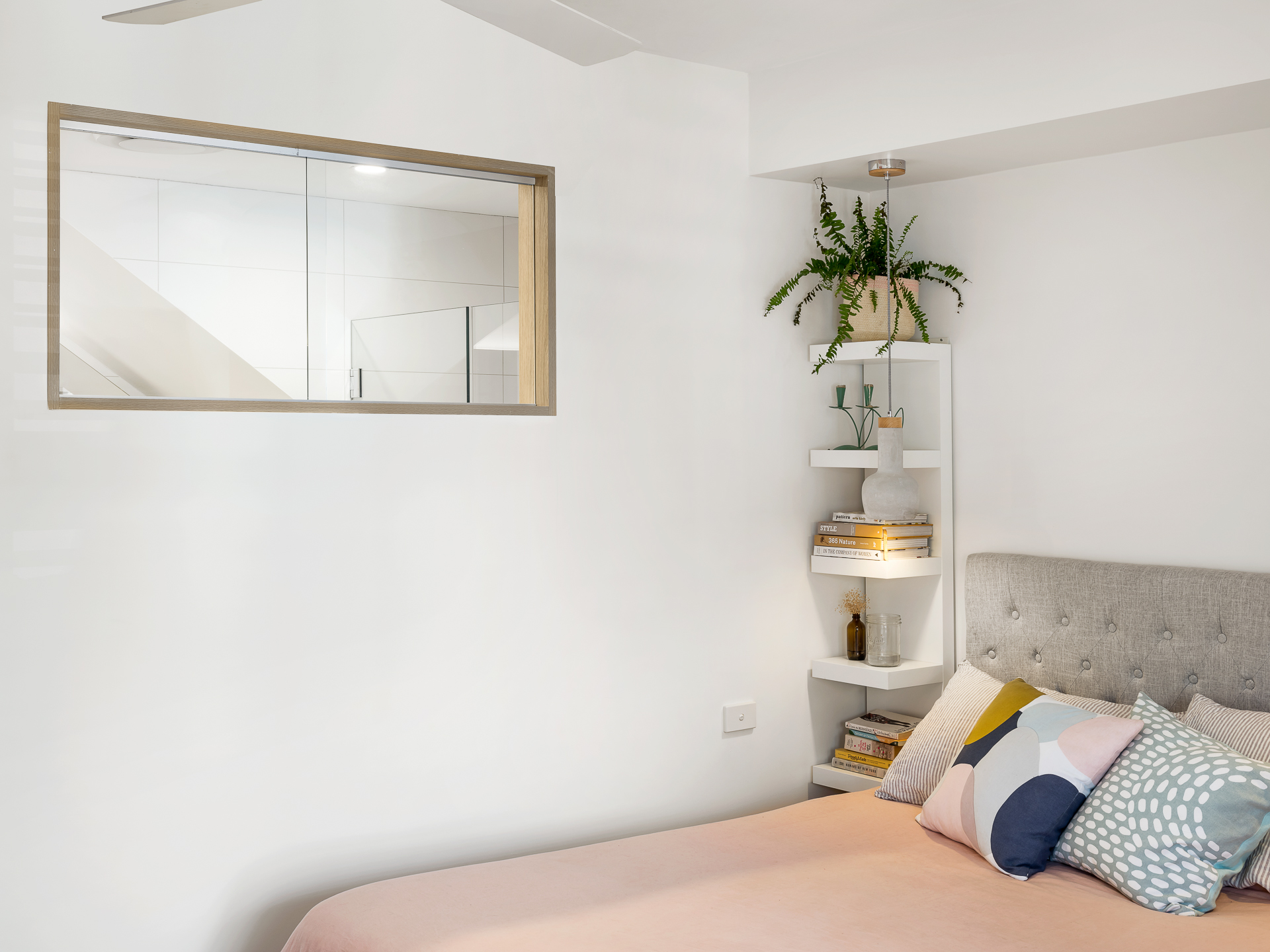 Mia had an ensuite next to her bathroom which was, in her words, ‘dark, dingy, damp, cold and uninviting’. She wanted more light and a better layout so she could easily get her family ready for the day.

Stuck in the back end of the bedroom meant that the bathroom had very little light. It was dark. The room was also small so we needed to create some openness and space. The reason the bathroom was so damp was because bathrooms circa the 1960s had no ventilation systems in place. Due to the location of this room, it had little if no sunlight and therefore was very cold.

Space: We decided to alter the layout so there was greater floor space that allowed for movement of two people in the room. We moved the shower to the back corner and doubled its size in doing so. We used light tiles and flooring with timber highlights to support the overall design concept and as well as open shelving for additional storage

Ventilation: We decided the best way to ventilate the room and assist in preventing damp was to create a recess bulkhead through the bedroom to the outside of the home where the damp could escape. We designed the recessed bulkhead so that it fitted in with the room decor and was as subtle as possible.

Warmth: We suggested and installed underfloor heating, which added to the warmth of the space, especially in the cold winter months.

Light: We decided to include a window to the bedroom as part of the overall design to allow the light to filter through to the ensuite.

The client, Mia, was absolutely delighted with the new design and loved her new bathroom which previously was not really being used. It’s become one of her favourite places in the home. Now inviting and functional, she enjoys getting ready for work the morning. With warm flooring underfoot, even her daughter prefers to have her hair brushed in the morning in mummy’s bathroom.

PREVIOUS   |   NEXT PROJECT
Get a Quote

“Our old bathroom was dark, out-dated, damp and cold. Very little room and light meant that the bathroom was not functional. We also had issues with ventilation. I never felt vulnerable with Rob and his team who were always professional and mindful of our family’s space during the renovation. The quality and the finish of our bathroom was superb.

I would recommend Rob and his team to anyone.”

How Can We Help?

From an entire interior home renovation, to a new kitchen, we take care of everything. Call us today on 1300 450 320 or leave your details below to book your custom design consultation.

No Thank You
Call Us
Enquire